Warning: getimagesize(https://openfemenino.com/wp-content/uploads/2020/11/Emily_Kristine_Pedersen_WInner.jpg): failed to open stream: no suitable wrapper could be found in /srv/vhost/openfemenino.com/home/html/wp-content/plugins/wp-open-graph/output.class.php on line 306 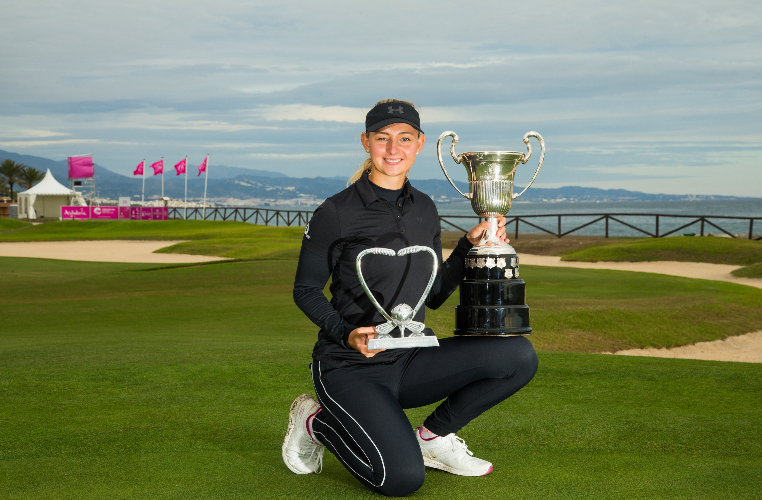 2020 will be remembered for many things but it will go down in LET history as Denmark’s Emily Kristine Pedersen powered to Andalucía Costa Del Sol Open De Espana victory, closing with a bogey-free final round of 66 (-6) for a four shot win from home favourite Nuria Iturrioz.

A model of consistency all year, the 24-year-old has won an impressive five LET titles from 12 starts and becomes the first player since Marie-Laure de Lorenzi to win three tournaments in a row.

Walking away with the first-place winner’s check of €90,000, Pedersen also collected €20,000 for winning the inaugural Race to Costa del Sol and finishes the year with a mammoth €415,000 in prize money.

Accompanied by her Father on the bag for her sixth career win, an emotional Pedersen, said,

“It was very special with my Dad here, he got me in to golf and he has been a big support the whole way, he kept me going when I was down and it is really big for me to have him here and win this amazing trophy. I was really happy to go through something really positive and good with him because he is right beside me off the course and now, he has been there on it.”

Leading by one shot heading into Sunday, Pedersen used all her front-running experience and looked in control from the start, opening with three pars before an uncharacteristic miss on the par four 4th hole.

Undeterred, the serial winner proceeded to chip in for birdie from the back of the green before steadying the ship with seven pars to extend her lead to four shots with seven holes to play, with playing partner Nuria Iturrioz trying to keep pace.

Another birdie at the short par four 12th followed,after a miraculous ‘shot-of-the-day’ from the trees, to keep her nose in front before further gains at Nos. 14 and 16 threatened to stretch her lead, only for the smiling Spaniard to record four birdies in five holes.
Not making it easy for the LET No. 1, the home-favourite fought back and pushed her right to the end but the unflappable Dane shut the door with clinical second shots with her famous hybrid club into both the 17th and 18th to record another two birdies.

Holing out from 4ft on the last for the four-shot win, Pedersen let out a controlled fist pump to match her control on the course and added,

“What I did on the 12th was the turning point, I was hitting it well on the front nine, but I just could not hole anything, and I started getting frustrated. I said to my Dad on the 12th tee, let’s try and make some birdies and then luckily, I had a shot from the trees and started the birdie run.”
The sensational performance sees her add not only the Spanish Open title to her ever-expanding trophy cabinet but also the coveted Race to Costa del Sol award.

“I can’t believe I’ve won the Race to Costa del Sol, it’s always been a dream of mine and I am so happy to not only be playing well this year but to win it here this week in Spain. The last few months have been amazing.”

Three-time LET winner Nuria Iturrioz put up a valiant fight in front of her home fans, recovering from a shaky start to record a final round of 69 (-3) to finish in solo second place. The gutsy display was enough to claim the award for the highest Spanish finisher and saw her walk away with a consolation prize of €51,629

Moving to 7th in the Race to Costa del Sol, the 25-year-old said,

“Little by little I am making the adjustments I need to be there, and I just need to give congratulations to Emily because what she has done this year is spectacular. I was already saying to her on the 17th and I am very happy with my attitude. Today was a complicated day at first, but I am very happy because I have fought, and it has been a little more fun”.

The smiling Spaniard continued, “In quarantine she must have worked very well and mentally I see she is very strong. I hope she can continue like that because it will be an enjoyment to play with her every year.”

Rising star Ana Pelaez also made history, recording the best finish by an amateur in the long-standing event on the LET schedule. Playing with her idol Azahara Munoz, the 22-year-old is one to watch for the future as she fired a sensational 67 (-5) to finish in solo third.

“I think I could have asked to win, but today was super complete. I played a very good golf, I have put myself to the test playing with Azahara because there are nerves that I did not know and that today I have had to live and I have known how to control. I think that today I can’t ask for much more”.